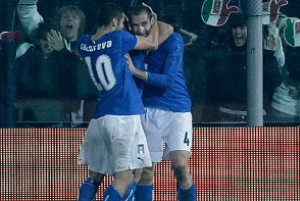 Giorgio Chiellini’s first-half header earned Italy a narrow victory over Sweden in the Azzurri’s last friendly match of the year in Cesena tonight.

The Juventus defender headed the ball from a corner past a helpless Andreas Isaksson after 28 minutes and it proved to be the only goal of the contest.

As expected, Italy coach Marcello Lippi fielded an experimental side with no members of the triumphant 2006 World Cup side in his starting XI.

Gareth Bale Eager To Play For Wales Against Macedonia