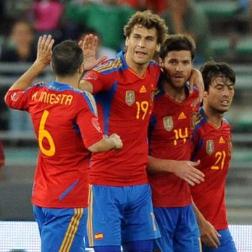 Italy edged out Spain in an entertaining match at the Stadio Comunale San Nicola in Bari, with the world champions’ night spoiled further by an injury sustained by Chelsea forward Fernando Torres.

Torres was initially thought to have an ankle injury, but the Spanish coaching staff later confirmed that he had suffered a light concussion.

Both teams created plenty of chances in an end-to-end match, with Liverpool misfit Alberto Aquilani grabbing a deflected winner 16 minutes from time.