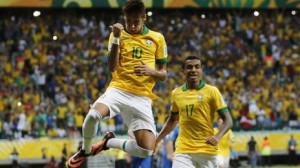 Neymar proved the inspiration once again as Brazil gave themselves the best chance of avoiding a semi-final with Spain by topping Group A with a dramatic victory over Italy in Salvador.

The 21-year-old lit up the Arena Fonte Nova with a spectacular second-half free-kick while striker Fred scored twice to set the Selecao on their way to a third straight win in the Confederations Cup.

Substitute Dante had prodded in to give Brazil the lead on the stroke of half-time, only for Emanuele Giaccherini to bring Italy level with a fierce shot early in the second half.
Neymar then produced his moment of magic, before Fred appeared to put the game beyond Italy with 23 minutes remaining.

Italy, however, came roaring back with a controversial and scrappy goal from Giorgio Chiellini. The Azzurri had the better of the final quarter of the match but Brazil made certain late on when Fred pounced as Gianluigi Buffon failed to hold Marcelo’s shot to send the stadium into raptures.