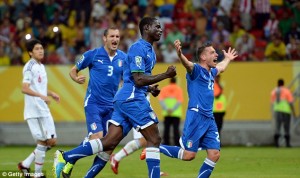 Italy completed a superb fightback to knock Japan out of the Confederations Cup and book their place in the semi-finals in a hugely entertaining game.

Japan went 2-0 up via Keisuke’s Honda’s penalty and Shinji Kagawa’s strike.
But Italy responded in some style when Daniele De Rossi headed in before Atsuto Uchida’s own goal and Mario Balotelli’s penalty made it 3-2.

Japan equalised through Shinji Okazaki and also hit the woodwork, before Sebastian Giovinco sealed it for Italy.

Alberto Zaccheroni’s Japan side could be justified in feeling the result in Recife was harsh on them.


Babes of the Confederations Cup 2013