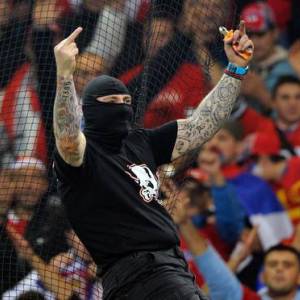 The Italian Federation have sensationally rejected an approach from the Serbian FA to replay Tuesday’s abandoned Euro2012 qualifier.

Initially a 3-0 victory for the Azzurri was expected when the game was called off after six minutes due to violent scenes from the travelling fans in Genoa.

Tomislav Karadzic, the Serbian Football Federation’s President said: “We will meet with UEFA President Michel Platini and the soccer governing body’s other top officials on October 18 and ask for a replay,”

“The FSS Executive Board is unanimous in the assessment that it was up to the Italian Football Association to organise the match properly,” he concluded.

The FIGC has chosen to respond only through the official channels and not through the media until the October 28 verdict.

“The FIGC calmly awaits the developments of the disciplinary investigation by UEFA and intends to maintain a responsible approach, including its statements,” read a Press release.

“The Federation was also responsible, both in its behaviour and its statements, on October 12 and the following days.”