It’s hard life at Utd, I Could only Join Madrid or Barcelona – Anderson Anderson admits he finds life hard at Manchester United but denies reports that he has tried to quit Old Trafford on several occasions. 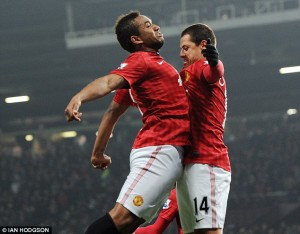 The 24-year-old midfielder made his 12th start of the season in Monday’s FA Cup win over Reading, but only four of those appearances have come in the Premier League.

Anderson has been hampered by injuries and concerns over his conditioning since joining United for £17million from FC Porto nearly six years ago, and comments attributed to the Brazil international emerged in Portugal last week claiming that he has made a number of attempts to leave due to concerns over losing his place at next year’s World Cup.

But he said: ‘It’s not true. Everyone knows I’m happy at the club. I’ve had a lot of injuries but I’ve never let the smile go from my face. I try to help the team all the time.

‘When I want to leave I will have to talk to the boss first. I don’t have any issues.

‘The only places you could go to from here are Real Madrid and Barcelona. You can’t have another choice. The level at Manchester United is so big. You come here and you are definitely going to win titles. I have won the Premier League three times. I have won the Champions League once and lost two finals. I have always been there.’