Reports are out claiming that Danny Welbeck has admitted it was difficult to eliminate former club Manchester United from the FA Cup. 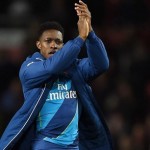 The England international striker delivered the killer blow for Arsenal in Monday night’s quarter-final at Old Trafford which ended 2-1 to the Gunners.

“Manchester United is a club that means so much to me,” Welbeck said.

Welbeck added: “I’ll always respect the fans, I had a lovely reception from them and I’m thankful for that.”

Welbeck started his career with United’s youth academy in 2001 before moving to Arsenal for £16million in the summer.