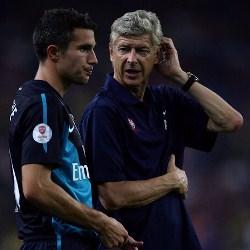 Arsenal chief Ivan Gazidis has revealed that there is nothing holding them back from making a big name signing.

He knows that a ‘marquee signing’ can set pulses racing but he is acutely aware that manager Arsene Wenger has enjoyed his greatest success with signings that did not break the bank.

Gazidis told arsenal.com : “Our fans have the right to be excited, to look forward to the season with anticipation and to expect to see top-class players and exciting things happening on the pitch,”.

“It’s our goal and our target to deliver all of that.

“Certainly if you sign a ‘name player’ that can be an easier way to get that [excitement] and I’ve got nothing against that. There’s no point of principle involved there.

“But if you look at the best players that we have on our team, they were not necessarily superstar players when we signed them – I don’t think any of them were when they came to Arsenal.

“It’s not that we were against doing that. That could happen. But because we run a self-sufficient club – it’s an important part of who we are because we have a philosophy of wanting to stand on our own two feet, keeping things in our control, not putting them in the hands of somebody else that we have to rely on – we have to think about the efficiency of the spend.

“There are many clubs – not just one or two – that have gone out and done exactly that and spent money on players who perhaps were difficult for them to afford but gave them a big hit, a big buzz, took the pressure off, and a year or two down the road found themselves having to address some difficult issues.

“If we found an established world-class player and we thought the economics made sense and he would add to what we could do on the pitch then there’s no philosophical objection to that.

“Arsène has no point of principle to show the world that he can build his own team of young players. That’s just not the way it is.

“It’s easy to lose perspective on what Arsène is trying to do, which, I think, is an extraordinary vision but if you look around here, the fans we have around the world, that vision is very attractive and very, very powerful. We should be proud of that.”