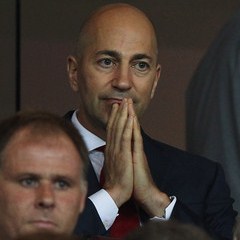 Arsenal chief Ivan Gazidis has declared that no-one can question their ambition.

Gazidis insists winning silverware, as well as finishing in the Premier League top four, remain primary targets – even without key players such as Robin van Persie, who departed for Manchester United in the summer.

He said: “We get accused of a lack of ambition or complacency because, apparently, the board are only interested in the top four – that is absolute rubbish.

“We’re trying to win. In fact, we try to do more than that, we try to win with style – we have a certain way of playing football that we take pride in. So again, it’s a high ambition.

“I know we haven’t achieved that in recent years. There’s no-one at this football club that doesn’t feel the pain of not being able to do that in recent years but absolutely that’s what we’re trying to do and we want to do it on a sustainable basis going forward.

“We’re very optimistic about this season, even through the loss of a player as important as Robin van Persie.

“We went through some major challenges last season and yet still came near the top of the game. But it’s not what we’re aiming to do. We’re absolutely trying to win silverware and we’re trying desperately hard to do it this year.”