Reports have emerged claiming that Arsenal chief executive Ivan Gazidis has implored the team to kick on after clinching the FA Cup on the weekend. 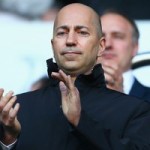 The Gunners ended a nine-year trophy drought by coming from two goals down to beat Hull City 3-2 at Wembley on Saturday and Gazidis is now hoping that is the foundation for another successful era for the north London club.

“We have a good platform to build on – it’s a great day for us to celebrate and we should do that as the Arsenal family,” he told the club’s official website in the wake of the triumph.

“But tomorrow we start work again and we’ve got to use this to progress the club, to take it forward. This was a very big step, to have the players understand what it takes to come through that kind of adversity, to get over the line whatever it took is a big step and now we need to take the next step.

“It was very big. It really colours the season. You come out and think we were seven points away from winning the double and that gives you encouragement to move forward and make the improvements we have to make.

“We know we’re still a work in progress but this is a big step, a big platform and we can build on this, and we will.”