Reports are out claiming that Ivan Rakitic insists Barcelona shouldn’t panic after their friendly defeat to Fiorentina. 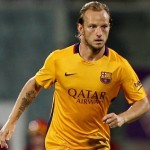 Barca coach Luis Enrique was critical of Barca’s defending at the final whistle.

Rakitic provided the assist for Luis Suárez’s goal spoke to the press after the game and explained “the team always wants to win but in general we worked hard.

“We could have scored three but it’s better to miss today than in important games.”