Reports are out claiming that Arsenal boss Arsene Wenger admits he wanted to sign Alexis Sanchez when first seeing him at Udinese. 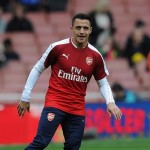 Sanchez almost immediately became a crucial player for Arsenal upon his move to the club from Barcelona in 2014, earning the adoration of fans for his direct running and relentless attitude.

Those qualities were no different to what Wenger first saw in the Chilean when he was playing at Italian side Udinese.

“He was very dynamic and direct and straight to the point. He was one of the players where the energy and intensity hits you straight in the face,” he told the club’s official website.

“He is one of those players that catches your eye with his level of energy and commitment with everything he does. That is what remained with me.

“Afterwards when he went to Barcelona I found him a bit timid at the start. He wanted to adapt himself to the Barcelona style and he couldn’t express himself but slowly he got into that again.

“I saw him play for Chile against France in Marseille and I was very impressed. I always had him in my mind.”