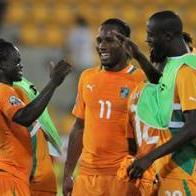 Goals from Emmanuel Eboue and Wilfried Bony gave Ivory Coast’s second string a 2-0 win over Angola in African Cup of Nations Group B, sending Lito Vidigal’s side crashing out of the tournament in Equatorial Guinea and Gabon.

In a half-empty Estadio de Malabo, Angola appeared to freeze, unable to get the point needed to qualify for the quarter-finals despite facing weakened opposition.

Ivory Coast had already qualified and, apparently unfussed about winning the group with a choice of Zambia or co-hosts Equatorial Guinea in the quarters, played a shadow team, the likes of Didier Drogba, Yaya Toure, Salomon Kalou and Gervinho watching on from the bench, although Drogba was given a run-out late on.

Angola only needed a draw to secure their passage but, despite fielding their strongest XI, looked content to sit back and slow the tempo in what was an uncharacteristically cagey affair for both sides, who normally attack with pace and vigour.