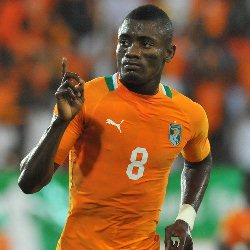 Ivory Coast secured their place in the quarter-finals of the African Cup of Nations with a 2-0 win over Burkina Faso in Group B.

Salomon Kalou gave Ivory Coast the lead after 16 minutes when he fired in a superb right-wing cross from Chelsea team-mate Didier Drogba.

An own-goal from Bakary Kone sealed Ivory Coast’s passage through and confirmed Burkina Faso’s elimination from the tournament after two defeats from their opening two matches.

Didier Zokora returned for Ivory Coast after missing the first match through suspension. Drogba featured alongside Kalou and Gervinho in a three-pronged attack.

Mahamadou Kere, who missed the defeat to Angola through suspension, was in the Burkina Faso starting line-up.