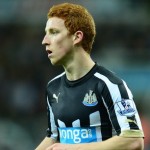 Newcastle United midfielder Jack Colback has admitted that they face a massive week.

With a Capital One Cup quarter-final at Tottenham on Wednesday followed by Sunday’s Tyne-Wear derby, former Sunderland midfielder Colback says his new club can ill afford to dwell on the disappointment of defeat at Arsenal.

“It’s a massive week,” said the 25-year-old, who takes on the Black Cats for the first time since his controversial move between the North-East rivals in the summer.

“We have to forget about that performance. They out-played us and won all their battles, which was disappointing. We weren’t quite at it and were a bit off the pace. Maybe we didn’t show Arsenal enough respect.

“But these are two massive games now. We’ve got to put things right. But we have shown character to bounce back all season, just look at the win we got against Chelsea (2-1).”