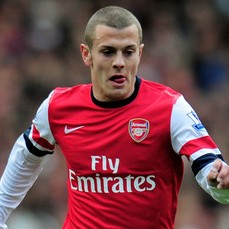 Jack Wilshere, who last played for Arsenal in the final game of the 2010-11 season, made his comeback in the 1-0 victory over Queens Park Rangers in the Premier League on Saturday.

The England international had been sidelined for more than 17 months because of an ankle problem.

Wilshere, 20, played for 67 minutes against Rangers at The Emirates before being replaced by winger Theo Walcott.