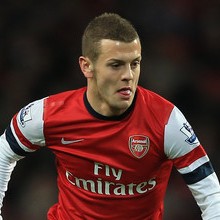 Jack Wilshere has declared that Thierry Henry will give Arsenal a much-needed lift when he signs on-loan from New York Red Bulls.

Injury prevented Wilshere from playing with Henry last season, but he is desperate to see his hero join ­Arsenal on loan again next month.

“It would be great to have Thierry back,” said Wilshere.

The England star, who turns 21 on January 1, said: “Growing up, I watched him. He’s the best striker I’ve ever seen and to play with him [after missing out last season through ­injury] would be amazing.

“He made a difference when he came last year. He scored at Sunderland and against Leeds.

“And I think Thierry just gives a buzz to the whole place.

“The fans love him. All the staff here, the ground staff, the medical staff, they all love him.

“He’s a legend. I think to have him around would give the whole club a lift.”