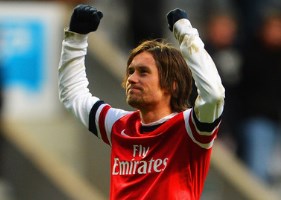 Reports are out claiming that Arsenal midfielder Jack Wilshere hailed Tomas Rosicky as among the best in the world after victory over Sunderland.

The 33 year old scored a sensational goal at the end of a flowing team move.

“It was good – a bit like my goal earlier in the season [against Norwich],” Wilshere said.

“Even though Rosicky is 33, he is up there with the best in the world at that passing and moving, getting in behind.”