It has been reported that Jack Wilshere is delighted to have helped Arsenal beat Tottenham to the signing of former Manchester United striker Danny Welbeck. 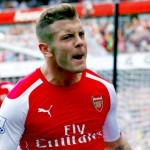 The England international striker made his Gunners debut yesterday in the 2-2 draw with Manchester City.

Wilshere was on England duty on deadline day and spoke to Welbeck to try and get him to join Arsenal ahead of their North London neighbours who also wanted to sign him.

“It was a bit of a strange one because I was going to training and remember reading that Tottenham were interested. I thought it was a bit strange that we weren’t interested,” said Wilshere.

“As soon as we got to the training ground he said to me that there was a chance it might happen. From then I was on to him every five or ten minutes asking: ‘is it done, is it done?’

“It was not done until 11.30pm and we were all buzzing because he’s a great addition.” AS Roma Prepared To Sell Alessio Romagnoli To Arsenal

Xherdan Shaqiri Delighted To Be Linked With Arsenal, Tottenham