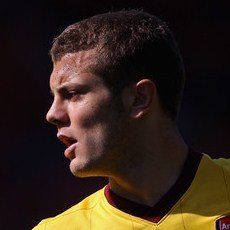 Jack Wilshere has dismissed talk of a move to Manchester City.

The 18 year old Arsenal and England international midfielder has been linked with a £40 million switch to the Eastlands club.

However the youngster has rubbished such claims on his Twitter page.

“People asking if im going city? I don’t kiss the Arsenal badge then leave. This club in my heart!” Wilshere wrote while also attaching a picture of him kissing the Gunners badge during a game.