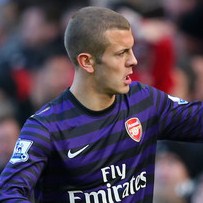 Jack Wilshere has revealed that he is feeling better with every game and admits his upcoming one-match ban may actually be beneficial as he continues his return from long-term injury.

“I am gutted to miss Fulham after being out for so long,” Wilshere said.

“It’s disappointing to miss any game but if I think about it another way, maybe it will be good for me to have a little break and come back for the Tottenham game [a week later].”