Arsenal icon Ray Parlour has urged Jack Wilshere not to rise to the taunts of opposition fans.

The FA took retrospective action against the the England international after he made a one-fingered gesture at Manchester City fans in the aftermath of the Gunners’ 6-3 drubbing. 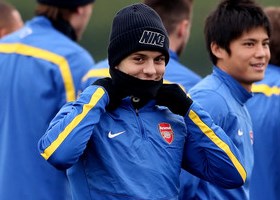 Parlour told talkSPORT : “Wilshere has to learn he can’t do that [make those gestures],”.

“It does wind you up at times but I saw him the other night and I told him he’s got to learn.

“The best way to get back at the fans is to score a goal, then you’ve done your job. The fans are trying to put you off but you’ve got to rise above that. You’ve got to go out there and know your job, and do your job.

“You can’t get involved with the crowd. And if you can go to places like the Etihad, play well and get a result, then you’re showing the fans what you’re made of.” Arsenal Not As Good As Juventus! – Monaco’s Leonardo Jardim