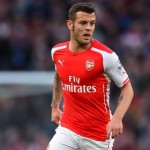 Reports are out claiming that Arsenal midfielder Jack Wilshere has urged teammates to clinch Champions League qualification this weekend.

They host West Brom on Sunday knowing a point will help them avoid a “season-defining” Champions League play-off.

The England international said: “It will be different [to qualify automatically for the Champions League] because over the last few seasons we have had that, that season-defining moment right at the start that we have managed to get through.

“It is always a big thing and it takes a lot mentally and sometimes we start the season thinking about that and drop points in the Premier League.

“It is not done for next season, it’s about 90 per cent done, and hopefully we will start the Premier League a bit sharper and when it comes to this time next year we will be in a better position.”