It has been reported that Porto striker Jackson Martinez has announced he’s joining Atletico Madrid. 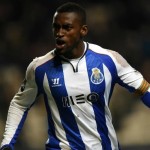 Martinez has confirmed he will join Atletico on a four-year deal after turning down an offer from AC Milan.

“I can confirm I am going to Atletico,” said Martinez after Colombia’s Copa America defeat to Argentina in Vina del Mar on Friday night.

“I am going there for four years, but I still don’t know when I will be introduced.

“It’s all ready. I’m going to enjoy spending some time with my family for now and then travel to Spain to introduce myself to my new club,” said Martinez after Colombia’s 5-4 defeat on penalties.

“I’m very excited about taking this step with Atletico Madrid. It’s a new challenge in my career and I hope things turn out very well for me there.

“I’m joining with the promise of contributing to ensure the club follows their evolution.”