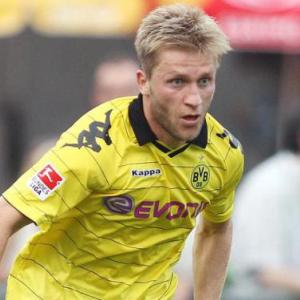 Borussia Dortmund midfielder Jakub Blaszczykowski spectacularly failed to score from 10 metres in front of an empty goal against Freiburg in the Bundesliga on Saturday.

The 24-year-old Polish international winger sensationally missed the chance to make it 3-1 for visitors Dortmund in the 83rd minute.

Blaszczykowski found himself alone with the ball in the box after Freiburg defenders and goalkeeper Oliver Baumann rushed towards Dortmund’s Robert Lewandowski as he charged down the left.

‘Kuba’, as he is affectionately known by Dortmund fans, had a host of options, from running with the ball into the goal to picking a corner to slot it in, but instead sent the ball over the bar.

“I have played as a striker in my time and he really did have all the choices,” said Dortmund coach Juergen Klopp with a smile after the league leaders won the game 2-1 to remain top of the table, with Freiburg hitting the crossbar in stoppage time.

“Instead of running with the ball into goal he sends it over. This can happen, no problem. But I think we will see this (missed) chance a few more times.”