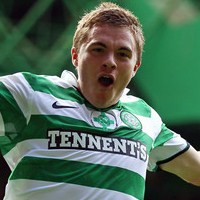 Celtic winger James Forrest has revealed that he is not ready to make the move to Tottenham.

The 20 year-old Scottish international star is in no hurry to pack his bags and head south.

Forrest told the Scottish Sun: “There are five months left this season and that is all I am focusing on — winning the league.

“It’s good to hear teams are looking at me because it shows I’m doing well. If I’m doing well hopefully that means I can do my bit for the team. ”

“I know there has been speculation, but I don’t really think about it. It’s just figures at the end of the day.

“It’s just rumours and because the transfer window is open in January players are going to be linked with other teams. You just have to deal with it and get on with it.