Everton midfielder James McCarthy has declared that they must not dwell on Arsenal’s comeback for Saturday’s 2-2 draw. 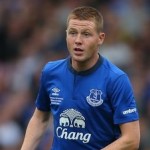 The Republic of Ireland international was named Man of the Match for his tireless performance in the middle of the park against the Gunners, but he was as disappointed as the rest of the side following two late Arsenal goals.

The 23 year old told evertontv: “It was a lot of running! But that’s what I am there to do. Obviously the result is the most important thing but unfortunately we haven’t managed to get the one we wanted.

“We have let another two points slip like last week.

“We have had two draws so far and that’s not good enough. Each and every one of us knows that.

“We need to bounce back quickly. I am sure [we will do] if the fans get behind us like they did against Arsenal – they were brilliant.”