It has been reported that James Milner insists Liverpool can finish in the top four. 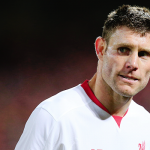 The Reds are aiming to respond to a hugely disappointing last campaign by returning to the Champions League.

And asked if the top four is a closed shop, Milner said: “Two years ago Liverpool nearly won the title, so it’s not that closed.

“Being here and seeing the quality here, everything’s there for us.”