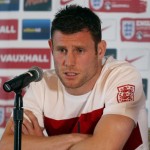 Milner insists he welcomes Hodgson’s decision to include the next generation of England hopefuls.

“I think it’s exactly what is needed,” he told the London Evening Standard.

“You want competition all over the squad and we definitely have that. We have players who can play in different roles and in different ways.

“You want that competition and it is an exciting young squad but we have a good mix of senior players as well. I think there are five or six of us who were at the last World Cup so anything we can do to help the young players, that’s a big role. We have to make those players feel as comfortable as they can be going into a World Cup.”