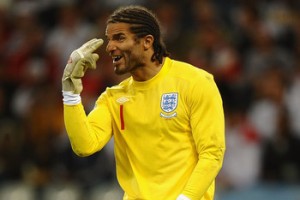 England’s No.1 goalkeeper David James has declared that he expects Slovenia to park the bus against England on Wednesday.

If anything, they have even less reason to commit men forward given a draw is enough to book their passage into the last 16.

The Portsmouth goalkeeper told reporters that : “I know we will go to win,”

“The difficulty will be, as was the case yesterday, is that we are up against a side that doesn’t want to lose.

“It is going to be tough.

“As much as people have said the ball is going to be an influence, the games have been tight across the board.

“Everyone expected Germany to romp past Serbia but they ended up getting beaten. It is a very tight World Cup.”


Rooney Apologises For Outburst And Pleads For Fan Support