Reports are out claiming that James Ward-Prowse insists Southampton can survive their mass exodus. 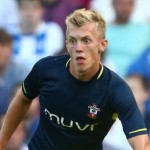 The 19 year old came through the academy with Luke Shaw and Calum Chambers.

Both have been sold – to Manchester United and Arsenal respectively – and with Adam Lallana, Rickie Lambert and Dejan Lovren all leaving for Liverpool, Saints have been rocked.

But Ward-Prowse insists he wants to stay and said: “It’s been weird seeing Calum and Luke go having spent so long with them. But I wish them all the best.

“We know players are going to come and go. The mood in the camp is confident and we are all working really hard.

“It’s tough with what has been going on but we are not worried about off the field issues. We want to keep this club at the same level.

“That (relegation) has not even crossed our minds. We want to emulate what we did last year and kick on even more.”