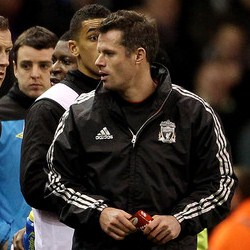 Jamie Carragher admits he has had a hard time of it this season.

The veteran defender has been left out of Liverpool’s first team for much of the campaign with Martin Skrtel and Daniel Agger holding down the centre-back positions and he says it has been tough but will continue to do whatever is best for the club.

“I can’t lie, it has been difficult at times,” Carragher told the club’s official magazine.

“But I’ve said it loads of times in interviews: you have to be respectful to the manager and the other players.

“Privately at times I’m frustrated but that’s because I’m a footballer, I want to play and I’m passionate – I wouldn’t be here in the first place otherwise.

“But I realise this happens to everyone at a certain age. It also reminds me what I’ve done.

“I’ve played for Liverpool’s first-team pretty much every week for 16 years.

“When you do it every week, it slips your mind a little but when you play the odd game against Oldham or Brighton at Anfield in the cups and you leave the pitch knowing you’ve won well and done all right yourself, it’s a great feeling.

“So it sinks in more when you’re not playing.”

Hyypia Reveals He Has No Regrets Leaving Liverpool