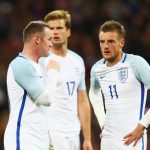 Reports have emerged claiming that Leicester City striker Jamie Vardy will wait until after the Euros before making a decision over his future.

The Mirror says Vardy smiled and joked with his England team-mates as he took a stroll with the team in Chantilly.

The Leicester striker is mulling over a potential move to Arsenal after the Gunners triggered his £20million release clause before he jetted off to the Euros.

But Vardy is waiting until his involvement in France is done before he makes a firm decision about his future.