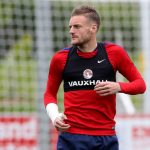 Reports are out claiming that Jamie Vardy is keeping Arsenal and Leicester City waiting as he continues to ponder his club future.

The 29 year old was due to choose whether to remain with the Foxes or join the Gunners before flying out to France for Euro 2016 with England on Monday.

But he boarded the flight with the rest of the England squad without informing Arsenal what he intended to do, as requested by the London club.

Vardy is still expected to make a decision at some stage on Monday.