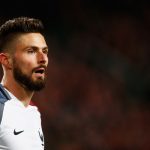 Reports have emerged claiming that Arsenal striker Olivier Giroud is looking forward to the addition of Jamie Vardy from Leicester City.

Giroud, speaking after scoring twice in France’s 3-0 victory over Scotland on Saturday night, says he is excited about the prospect of teaming up with Vardy next season.

Giroud told Sky Sports News HQ : “I have been told that Jamie wants to join us and it’s very good news for us. I think we can be complimentary and that’s all I can say,”.

“He’s a fantastic player, so it’s good news for us.”

He added: “As I said in the past I am happy with competition. We have always had fantastic strikers at Arsenal and I want the best for this club. Hopefully he is going to help us win this title.

“The boss wanted to sign at least one or two strikers, so I expected a top striker and I think it will benefit the club and hopefully he is going to score a lot of goals like he did at Leicester.”

Lukasz Fabianski : I Should Be Arsenal No.1