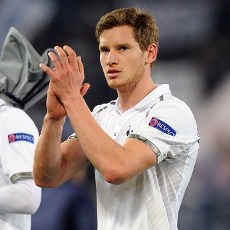 Jan Vertonghen has revealed that he decided to join Tottenham instead of North London rivals Arsenal because of a position issue.

The 25 year old Belgian international centre back arrived at White Hart Lane from Ajax in the summer and has disclosed the reasons why he headed there and not to the Emirates Stadium after some heavy interest from the Gunners.

He told NUsport : “(Arsenal’s interest) was concrete, but they wanted me to be a controller in the midfield, an Emmanuel Petit-type,”.

“I’m not afraid of competition, but the overall picture of Spurs appealed to me more.

“Ultimately, I just came to play at centre-back.

“Gareth Bale had to play left-back, but it did not work so he pushed forward and I moved to full-back.

“I see myself as a centre-back. I’m not agile enough to play against players like Nani and (Raheem) Sterling.”