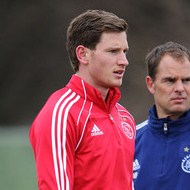 Jan Vertonghen has declared that he is edging closer to signing for Tottenham.

The Ajax centre back seemed taken aback by the amount of interest in his future, especially when news of his impending move broke on televisions in the press conference room.

The defender, though, continued to answer questions in flawless English and insisted that the fact White Hart Lane will not play host Champions League football next season is not a major issue.

“It is not that big a problem,” Vertonghen said. “It would be nice but I chose for the club not just one season.

“For me it is important the connection with the club. They give me a very good feeling about everything.

“They invited me over and they also really want to close a deal, which is what gave me a good feeling.

“They showed me everything about where they want to be in the next few years and that is what I like most.

Vertonghen is likely to line-up for Belgium at Wembley.

If things had gone differently his future club manager Harry Redknapp could have been boss of the Three Lions – something the defender is relieved is not the case.

“I met him once and I think he is a good manager,” he said. “He was very friendly.

“[I am happy he is not England manager] as I have only heard good things about him and I am happy he stays at Tottenham.”

However, the player tweeted after the press conference: “Don’t believe everything the press writes. Nothing is confirmed. Still player of Ajax.”