Jan Vertonghen has declared that next Sunday’s Premier League clash with Manchester United is the perfect moment to bury the memory of the 6-0 hammering by Manchester City. 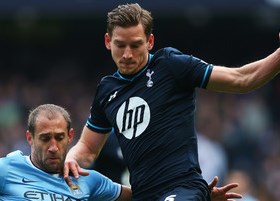 The Tottenham defender said : “It is a good thing we play Manchester United next,”.

“We are at home and we have the support of our crowd. I am sure we can win that game.”

“It is not a big problem,” the defender added.

“Of course we didn’t play well against City but we are better than that.

“We can solve the problem. We will talk and bounce back on Sunday.”

Vertonghen does however admit that Spurs have no excuses for the Etihad debacle against City.

“Everybody was fit,” he said.

“Many of us have had international matches but we play European games as well so that was not a problem.

“It is our own fault. Manchester City score a lot of goals at home but we gave three or four of them away too easily.

“I would just love to have the chance of playing this game again next week because we are better team than that.”