Tottenham defender Jan Vertonghen insists that the team need to ensure victory against sides around them if they want to compete for the Premier League title this season. 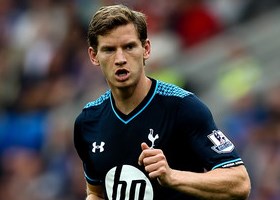 Spurs currently sit fourth following Sunday’s 0-0 draw at Everton and although it was a good result, the 26 year old centre back is of the belief that the north Londoners need to really step up in matches such as this.

The Belgian told Sky Sports : “I think in the first half we were the better team and had to score. There were not a lot of chances but more possession,”.

“We were very sharp and did a lot of pressing.

“Because of circumstances I am at left-back and I try to attack because I know I can hurt teams.

“A point is okay but of course there are a lot of other teams at the top who keep winning so we have to see if we can win those big games as well.”