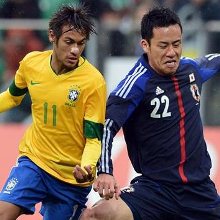 Mano Menezes’ side gave their opponents no chance as they quickly took control of the match, midfielder Paulinho firing them ahead from outside the box in the 12th minute.

The Corinthians man had a chance to extend the advantage when he rounded keeper Eiji Kawashima but could not convert from a narrow angle. However, minutes later, Santos star Neymar doubled the score from the spot.

Neymar was credited with his second of the afternoon early in the second half when his cross deflected off in defender Atsuto Uchida.

And things got worse for Alberto Zaccheroni’s side in the 76th minute when Kaka, back with the Selecao after a two-year absence, broke from midfield and found the net.

Kaka and Hulk were both denied by the crossbar but Brazil nevertheless ended their tour with two wins and 10 goals, after crushing Iraq 6-0 in Sweden last week.