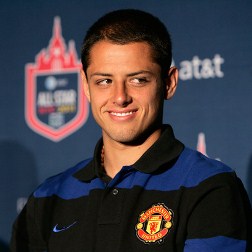 Sir Alex Ferguson revealed that Javier Hernandez is ten days away from being available for selection.

The Mexican international striker has been handed a break after suffering concussion during United’s tour of the USA.

Ferguson said: “Chicharito is still maybe 10 days away from taking part in any football training.

“It’s not a concern, it’s just a precaution given the fact he had concussion a couple of years back.