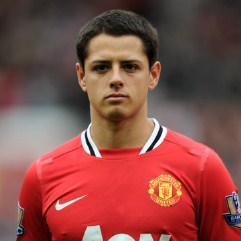 Javier Hernandez is hoping to play a key role as Manchester United go in search of a 20th league title.

United are three points clear of neighbours Manchester City with eight games to go, and the 23-year-old says there are no nerves within the champions’ squad.

“It’s a part of the season that all the players want to be involved in,” the Mexican told ESPN.

“It’s a long season so these final few games are more emotional for everyone, but we have a big chance to win the Premier League again.

“We’re in a great position because it depends on us – if we win all our games, we’ll win the league. We’re not in Europe so we’ll probably be a little bit fitter, because we’re only playing each weekend and have long weeks to rest and prepare for each game.”

“I want to be a world-class player, so I need to work on every aspect of my game: my movement, goals and body strength, because I’m not the tallest or the strongest,” he added.

“I need to be ready to compete in this tough league because it’s very physical, quick and technical. With the help of the coaches and my team-mates, I’m improving day by day.

“I do my best and if the manager wants me to play one minute or 90 minutes, I need to be ready to help the team.”