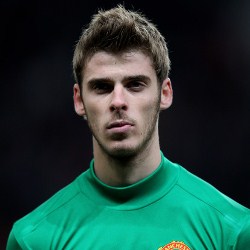 Javier Hernandez has hailed the performance of David de Gea in their victory at Europa League opponents Ajax.

The Mexican international striker agreed that De Gea had also played his part in the victory.

The United keeper produced his party-piece flying saves in the latter stages against Chelsea and Liverpool, but in Amsterdam, he pulled one off to deny Siem de Jong when it was still 0-0 early on. Anderson Out For Three Weeks With Hamstring Injury