Reports are out claiming that Javier Hernandez has failed to acknowledge current Manchester United manager Louis van Gaal in his farewell message. 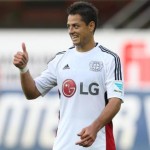 Chicharito departed Old Trafford to join Bayer Leverkusen for £7.3million in the final days of the summer transfer window.

The 27-year-old Mexico international took to social media to praise former manager Sir Alex Ferguson and chief scout Jim Lawlor and thank the club’s fans for their support during his time with the Red Devils.

However, there was no love for van Gaal or Hernandez’s other manager while at United, David Moyes

“I want to thank Sir Alex Ferguson and Jim Lawlor, the club staff, all the players I played with; but especially I want to thank all the Manchester United fans in the UK and all around the world for the incredible support I’ve had this past four years and all the best wishes they have for me in my new chapter!!” Hernandez said.