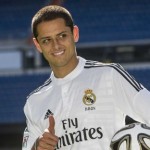 Ferguson said: “He will be a major success at Real Madrid and I’m confident that he will score plenty of goals.

“He has his feet on the ground and has always wanted to play for Madrid; it will be a good move for him.” Guardiola : Real Madrid Is Still The Most Powerful Team!