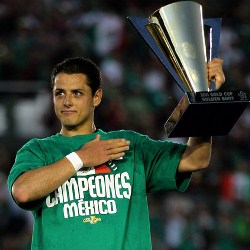 Javier ‘Chicharito’ Hernandez has been named the Most Valuable Player at the 2011 CONCACAF Gold Cup.

The Manchester United striker was the main man for El Tri as they swept to their sixth win in the tournament with a 4-2 victory over the USA in the final on Saturday.

Although the 23 year old did not score in the decider, he scored in four of Mexico’s six victories and finished as the tournament’s leading scorer with seven goals.

The competition’s other awards of Best Goalkeeper and Fair Play went to Honduras’ Noel Valladares and Mexico respectively.