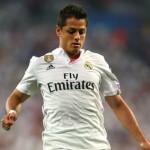 Reports have emerged claiming that Tottenham are making a move for Manchester United striker Javier Hernandez.

Chicharito is this season on-loan with Real Madrid.

The Daily Star Sunday says the Mexican international won’t be staying at The Bernabeu and United boss Louis van Gaal has made it clear Hernandez is not in his plans.

Chicharito, 26, will be returning to Old Trafford – but not for long.

Now Spurs have added Hernandez – 37 goals in 102 United games – to their list of summer targets.