Reports are out claiming that Liverpool are close to trumping Arsenal for Atletico Madrid fullback Javier Manquillo. 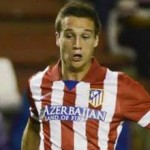 It is said that the Gunners have been locked in talks with Atletico over a deal for the youngster for much of the summer but with terms failing to be agreed, Liverpool have stepped in.

AS reported that the Spanish U20 international is now only a step away from signing for the Reds and is eager to see the deal done.

The youngster pulled back from negotiations with Arsenal after seeing their swoop for Newcastle United fullback Mathieu Debuchy. He feels he’ll get a better chance of regular first team football at Anfield, despite the presence of Glen Johnson.

Johnson has less than a year to run on his existing contract.