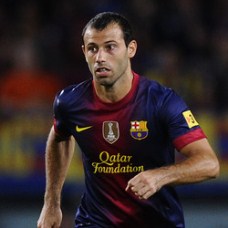 It is the continuing goalscoring exploits of Messi, who has moved three ahead of Muller after netting twice against Betis and twice again in the cup win over Cordoba, which set him apart from the rest according to Mascherano.

The 28 year old said : “Messi is unique because he is already the best player in the history of this sport,”.

“We are talking about 88 goals as if it were something normal but what he has done is incredible. This is a lad who has been touched by a magic wand.”