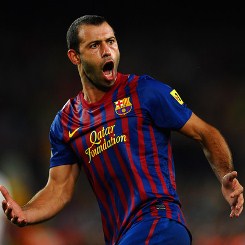 Interesting news are out and it has been revealed that Barcelona midfielder Javier Mascherano is being linked with AC Milan.

The Argentine has a close association with Joorabchian.

Milan are eyeing Mascherano as a replacement for Mark van Bommel, who is expected to leave in 2012. David Luiz Happy To Turn Down Barcelona For PSG Move